This September, I began working as a student contractor for the US Geological Survey in Menlo Park. After a whirlwind first week of moving across the country, I set off again with researcher John Stock and postdoc Corina Cerovski-Darriau to the Big Island of Hawai’i. Last week, we finished up two weeks of installing instruments to measure weather conditions and dust fluxes due to overland flow and aeolian processes above Pelekane Bay to help the local land managers prevent erosion into the coral reefs. And while I learned a lot about the area from a scientific perspective, I learned even more about how to conduct science that actually makes a difference. 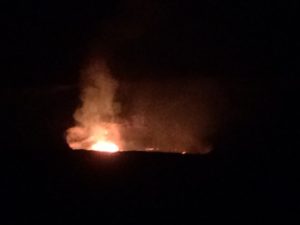 The lava lake on the summit of Kilauea at night

Hawai’i is a unique place in the US: it boasts a significant population of native Hawaiians, mixes American culture with Polynesian and Asian traditions, contains a wealth of natural resources. It’s current occupants span the socio-economic range from poverty to wealthy descendants of royalty. We worked in paniolo country (which roughly translates to “cowboy” in Hawaiian), which is the dry, northern side of the Big Island full of cattle ranchers. So, most of my days in Hawai’i were spent messing around with pvc pipe in bleached grasslands, and eating lunch next to cattle and cacti. The land itself is owned by the Queen Emma trust, which leases the land to Parker Ranch to generate income for the descendants of Hawai’i’s last independent ruler.

But we are not the only ones interested in preserving the Pelekane watershed. Various groups, including the Kohala Watershed Association, Forest Solutions Inc, the National Park Service, the USGS’s Pacific Islands Ecological Research Center and past watershed managers all share a desire to keep the rapidly eroding soil on the hillslopes. However, all have different mandates and levels of experience in Pelekane, and coordination between them is difficult since Queen Emma does not facilitate meetings.

Lava from Kilauea flowing into the ocean

Without rigorous documentation of the previous projects available for Pelekane, we learned about them through informal conversations, such as having people over for dinner who were involved to pull out maps and discuss areas of interest, or grabbing beers at the local brew house, before going out into the field together. To do this effectively, we had to communicate our scientific goals clearly and convincingly to people with a variety of expertise. And each group had different motivations and goals: re-introducing native Hawaiian species, sustaining cattle ranching for years to come without exhausting the land, preserving the heiaus (Polynesian temples/community centers) downslope of the watershed, and keeping the bay water a nice blue for surfing. One highlight was catching Gordon, the cowboy who worked for Parker for over 30 years, on his trips between paddocks, and discussing the gradual re-vegetation of the land after killing a ton of goats and changing the cattle rotation schedule (Hawai’i actually has a significant feral goat population, numbering in the thousands on the Big Island). So, each group had an area of expertise to contribute, from an un-paralleled knowledge of ranching operations to an understanding of reforestation progressions in Hawai’i to having physically installed the current erosion prevention measures. From a scientific perspective, this was an incredibly rich source of data just waiting to be accessed, but that had to be gained by speaking across areas of expertise and even different languages (we often used Hawaiian words to describe plants, landforms and locations). Beyond doing interdisciplinary work, we were doing collaborative citizen science.

The field sites near Waimea

The other benefit of working closely with the land management organizations was talking to the people who would benefit most from improved watershed policies. We drove out with the Kohala Watershed Association (KWA) crew for a couple of days, and talked with them about the erosion prevention measures already in place. Over their time with KWA, the workmen knew which measures had prevented erosion and which only ended up creating more work for them. So, our job as scientists was not only to get rates of erosion across the landscape, but to give the management teams the data to evaluate their experiences and make sure their labor went towards preventing erosion in the most efficient manner possible. And receiving their support in the field gave us an essential resource for transportation, maps and tools. 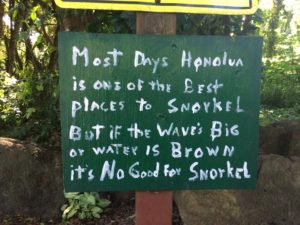 A sign near a coral reef in Maui explaining why erosion of soil into the Honolua Bay, which causes brown plumes in the water, is such a problem.

While my trip to Hawai’i may have been a bit short on time spent on the beach, I am extremely grateful for the opportunity to participate in a scientifically interesting project with such visible benefits for the community.